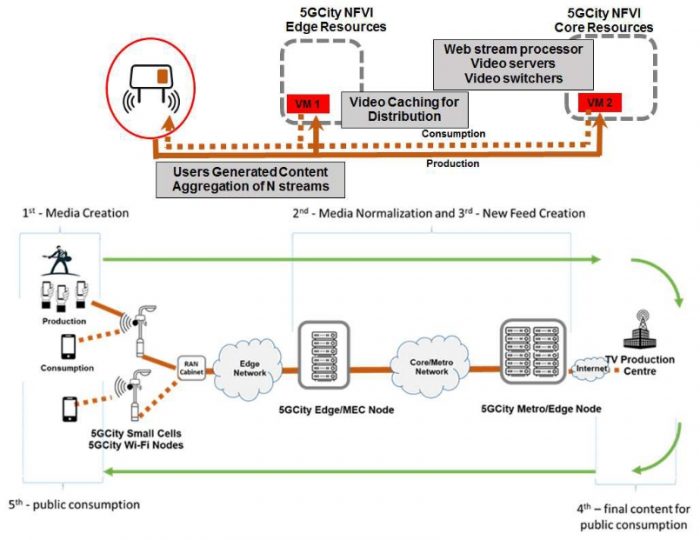 The growing importance of crowd streaming contributions has become increasingly relevant in the media domain. As a result of the evolution of mobile devices with more and better features, allows the footage made by these devices be used in broadcast workflows. The high potential associated with the participation of an ordinary citizen in the capture and dissemination of interesting footage content in specific geographical areas creates some challenges in the city infrastructures. The 5GCity project aims to help in solve these challenges.

Currently, every city has several events occurring in distinct places all over the city, creating potential venues for multiples live streams. It’s very common to exist a media partner that covers one or more events and create some live contents for their viewers. The 5GCity cities are creating the technological ecosystem necessary for the more demanding hyper connect society, that’s allow more users to be connected simultaneous, with low latency and open the door for computing capabilities near to the users. With this ecosystem the media partners have the tools to rapidly deploy their own virtual solution over the top of the city infrastructure. This symbiotic relationship cultivates a better spectrum management, reduce costs and allows new monetization strategies.

Consent the participants to contribute for the traditional feed with their own mobile devices is a unique and engagement experience, not only for the people that are streaming but also for the media broadcaster viewers. In a technological perspective, a crowd streaming media participation can be divided in five steps, from the media creation to the media consumption. The crowd with their own mobile devices makes the first step, enjoying the show and streaming it. Nowadays exists a lot of different devices in the hands of public, with different operating systems, different ages, different peripherals and different computing capabilities. Each brand or model have different types of video recording capabilities. These differences are in the framerate, codecs applied on the video and on the audio, etc. The differences create the necessity of the second step, the video and audio normalization. To solve this issue is necessary computing power and the 5GCity ecosystem have computing nodes near the users to process this video. A more traditional alternative was sending the streams to the cloud; however, the end-to-end latency would be much higher. Doing it in the edge, streamlines the entire process and ensures all the streams have equal characteristics. The second step can be made on the MEC or Metro DC, or in both, the only requirement is processing power. 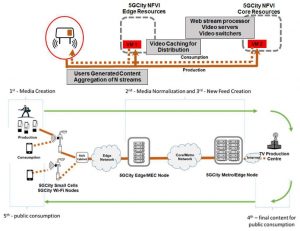 The third step is to create a new feed based on the normalized crowd feeds and deliver it to the TV production centre. This can be made by a specialized production member that creates a unique feed based on the feeds from the crowd. The fourth step is delivering the final content to the end user from the TV Production Centre to the Venue. The last step is the consumption of the feed by a user in the venue or nearby area. The figure shows where each step is made on the live cycle.