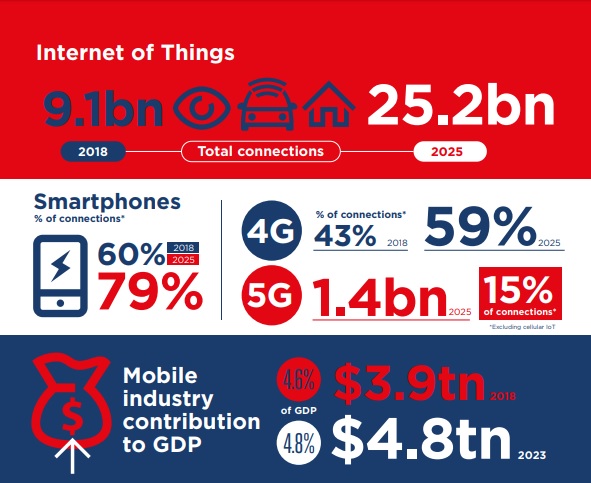 5G is on track to account for 15 per cent of global mobile connections by 2025, as the number of 5G network launches and compatible devices ramps up this year, according to a new GSMA report.

The 2019 global edition of the GSMA’s flagship Mobile Economy report series – published today at MWC Barcelona 2019 – reveals that a further 16 major markets worldwide will switch on commercial 5G networks this year, following on from the first 5G launches in South Korea and the US in 2018. It is calculated that mobile operators worldwide are currently investing around $160 billion per year (capex) on expanding and upgrading their networks, despite regulatory and competitive pressures.

“The arrival of 5G forms a major part of the world’s move towards an era of Intelligent Connectivity, which alongside developments in the Internet of Things, big data and artificial intelligence, is poised to be a key driver of economic growth over the coming years”

“The arrival of 5G forms a major part of the world’s move towards an era of Intelligent Connectivity, which alongside developments in the Internet of Things, big data and artificial intelligence, is poised to be a key driver of economic growth over the coming years,” said Mats Granryd, Director General of the GSMA. “While 5G will transform businesses and provide an array of exciting new services, mobile technology is also helping to close the connectivity gap. We will connect more than a billion new people to the mobile internet over the next few years, spurring adoption of mobile-based tools and solutions in areas such as agriculture, education and healthcare, which will improve livelihoods of people around the world.”

The new report reveals that:

According to today’s report, mobile technologies and services generated 4.6 per cent of GDP globally last year, a contribution that amounted to $3.9 trillion of economic value added3. This contribution is forecast to grow to $4.8 trillion (4.8 per cent of GDP) by 2023 as countries around the globe increasingly benefit from the improvements in productivity and efficiency brought about by increased take-up of mobile services. The mobile ecosystem also supported almost 32 million jobs in 2018 (directly and indirectly) and made a substantial contribution to the funding of the public sector, with more than $500 billion raised through general taxation.

Looking further ahead, it is forecast that 5G will contribute $2.2 trillion to the global economy over the next 15 years, with key sectors such as manufacturing, utilities, and professional and financial services benefitting the most from the new technology.

The new report ‘The Mobile Economy 2019’ is authored by GSMA Intelligence, the research arm of the GSMA. To access the full report and related infographics, please visit: www.gsma.com/mobileeconomy/.