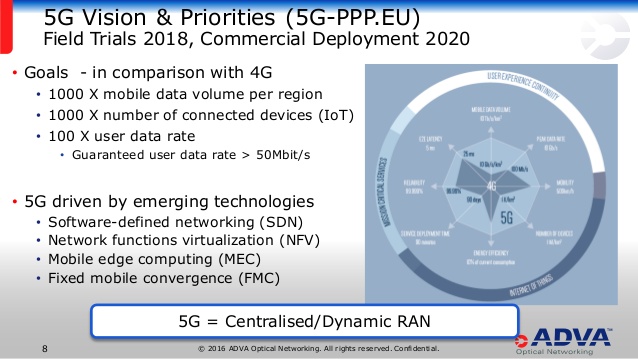 Plans to establish the European 5G Observatory were announced in February 2018 by Commissioner Gabriel, to closely monitor the progress of the European 5G Connectivity objectives for a competitive Digital Single Market by 2025. The European Commission has launched recently a RFP looking the first comprehensive reports and a publicly accessible online platform to be available from end 2018.

In the meantime, the Commission is reporting on progress of 5G deployment as part of the European Digital Progress Report in the area of Connectivity, which is planned to be published in May 2018. An overview of 5G trials as well as of preparatory actions by Member States in the area of spectrum and national 5G roadmaps will be provided.

In line with the 5G Action Plan for Europe, EU countries have already agreed on a 5G roadmap to coordinate the availability of new 5G frequencies. A number of Member States have published national strategies on 5G in the context of national broadband plans (NBPs).

An industry-led 5G trial strategy provides opportunities for 5G partnerships in Europe, leading the way to commercial deployment. Furthermore, the Commission will this year invest EUR 200 million of funds in the context of the 5G Public Private Partnership (PPP) to launch large 5G pre-commercial trial projects. Many of the new 5G cross-industry partnerships will build on so-called “5G corridors” – some cross-borders sections of highways which can be used for testing Cooperative, Connected and Automated Mobility services. The information reported by the 5G PPP on the trials conducted by European industry will make up an important part of this first version of the European 5G Observatory.

The following developments will be monitored by the Observatory: