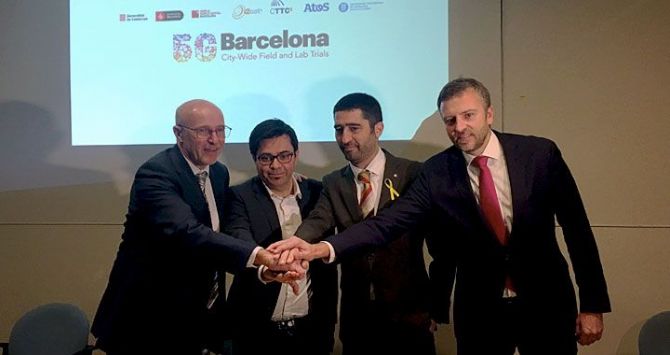 The  5G  is the mobile technology of the future. If currently the  4G  allows speeds of up to 300 megabytes per second and has meant the era of connectivity, the  5G will multiply the speeds  by almost 150 times, and will mean the acceleration of the internet of things. In a market that has not yet established who will pilot the new technology,  Barcelona  wants to be a benchmark: it will be postulated as the  European 5G laboratory .

Generalitat , the  City Council  of  Barcelona , the  Mobile World Capital , the Foundation  i2CAT , the  CTTC ,  Atos  and  UPC  have come together to achieve that goal through the 5GBarcelona initiative, which seeks to turn the city and Catalunya in one of the hubs of digital innovation in the field of 5G.

The collaboration framework agreement will serve to present candidacy to the European Commission to be chosen as “5G City” and thus opt for European funds to deploy projects related to this technology, which is still under development. The joint EU plan (called 5G-PPP) has a budget of up to 700 million euros, and is divided into several phases. One of the next ones to be resolved is which cities will be chosen to obtain funds for projects.

The Barcelona project, unlike other candidates that focus on specific issues, is much broader: create an experimental open environment of 5G city, that is, turn the city into a large laboratory where companies and administrations can test their solutions, explained Carlos Grau, director of the Mobile World Capital. In fact, it has already been discussed with  Seat ,  FC Barcelona  and  Hospital Clínic  to join this initiative. Technological rooms will also be used to publicize and promote projects, and the different telecommunications agents will join the initiative.

The initial base of the project will be infrastructures currently under development in the city of Barcelona, ​​while agreements are sought with other actors for new investments.

The Secretary of Telecommunications, of the Generalitat, Jordi Puigneró, defended that the agreement will serve to “create wealth”, while the director of technology and innovation of the i2CAT Foundation, Sergi Figuerola, said that Barcelona will compete with “10 or 12” consortiums in the European contest.

In five years, the 5G will create an annual economic activity of 130,000 million euros and more than 2.3 million jobs. A market, according to Grau, to which Catalonia can obtain between up to 15% of resources.