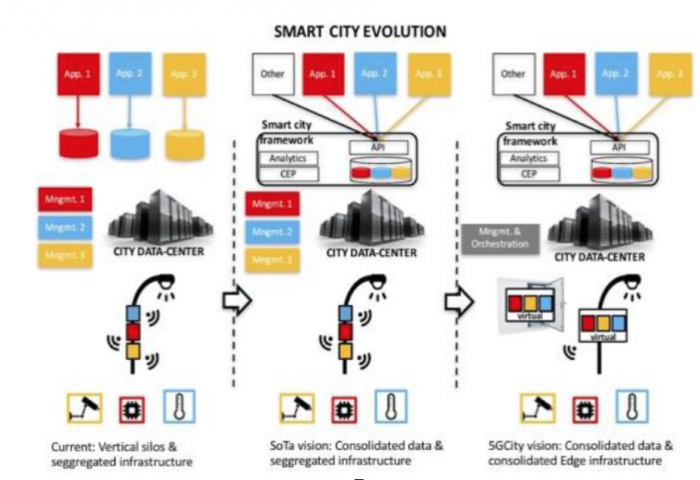 Network infrastructure sharing is a fundamental element to unlock commercial take up of dense
5G wireless networks, as it would be unrealistic to expect the deployment of hundreds of
vertically-isolated access networks in such dense environments. However, within future 5G
infrastructures, network sharing should evolve beyond the traditional infrastructure sharing
models used in previous generations, i.e. site, mast, RAN and core network sharing [1]. The
future 5G network will be composed of a set of interconnected virtual network functions
(VNFs), which will be dynamically and flexibly instantiated over a highly-distributed cloud
infrastructure. The transition from specialized hardware to VNFs executed on general-purpose
processors is expected to affect not only the mobile core network but also aspects of the RAN
[2]. Hence, network sharing models should adopt the trend towards cloudification/virtualization,
which will become one of the pillars of future 5G networks.

Given this landscape, we envision that the open access model, or neutral host model, will
come to play a key role on the deployment of 5G networks, especially in urban scenarios where
very dense deployments of Small Cells will be required to serve businesses, shopping districts,
and crowded events. For example, a neutral host operator (i.e., the infrastructure owner) could
deploy and manage Small Cells while leasing out slices of network capacity to the different 5G
service providers on a fair basis to foster competition.

To turn this vision into reality, we posit that municipalities are in a privileged position to act as
future 5G neutral hosts because of three fundamental reasons: (i) municipalities own and
manage the best urban spaces to host 5G Small Cells, which are already equipped with backhaul
and power; (ii) municipalities are themselves undergoing a digital transformation towards
becoming Smart Cities, whose objectives, including cloud and/or edge computing platforms, are
perfectly aligned with those of 5G networks; and (iii) municipalities constitute the perfect
neutral host whose main aim is to benefit end customers, i.e., citizens.

[5GCity vision] 5GCity will design, develop, deploy and demonstrate, in operational
conditions, a distributed cloud and radio platform for municipalities and infrastructure
owners acting as 5G neutral hosts in Barcelona, Bristol and Lucca.

5GCity will essentially turn a city into distributed, third party, multi-tenant edge infrastructure,
extending the cloud model all the way to the edge while enabling dynamic, fast, and
interoperable provisioning of 5G-based services. The 5GCity platform will embody a
hierarchical architecture embedding network, compute and storage resources distributed
across Small Cells and deployed at various technical spaces throughout the city: in lamp posts,
urban furniture, street cabinets, and traditional data centres. The 5GCity platform will be used
by 5G service providers to offload capacity to the neutral host, by municipalities to host Smart
City services, and by additional third party services, such as media or automotive verticals, to
offer innovative services to their customers. The 5GCity consortium features the relevant
actors in the value chain including municipalities, service providers, neutral host operators,
telecom vendors, as well as relevant agents in the European academic sector and the
European media community.